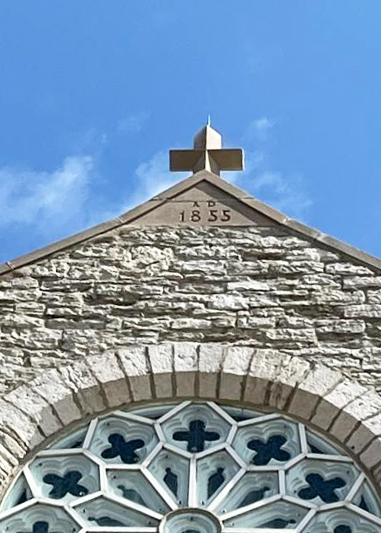 After meeting in homes in Upper Alton since 1838 and constructing a temporary church, the Catholics of Alton and Fr. Michael Carroll, pastor, built a new stone church in 1843 on the north side of Third Street between Alby and Easton Streets named St. Matthew. The building was destroyed by fire ten years later. For the next three years, Masses were offered in a large hall over a livery stable. On April 7, 1854, property at 717 State St. was purchased from Peter and Harriet Wise for the grand price of $600. The current church building, constructed with local native limestone, was begun in 1855 and completed two years later. One can see the date carved in stone at the pinnacle of the wall above the main entrance and rose window. The architecture of Ss. Peter and Paul is a beautiful specimen of pure  Gothic. The interior of the church, with its graceful arches, clustered columns, capitals, hood-molded windows, and spacious choir loft attracts many lovers of art. The church is a hundred and twenty-five feet long and sixty feet wide and includes two sacristies with attics.

A most significant part of the church’s history occurred while the church was under construction. On January 9, 1857, the Episcopal See was transferred to Alton from Quincy. The diocese comprised the southern half of the state while the Diocese of Chicago comprised the northern half of the state. Rt. Rev. Henry Damien Juncker became Alton’s first bishop. Rt. Rev. Peter Baltes became the second bishop of Alton in 1870 at the death of Bishop Juncker. Bishop Baltes died in 1886, and both are buried in a crypt below the church. The third and last Bishop of Alton was Rt. Rev. James Ryan died in 1923 and is buried in St. Patrick Cemetery.

On July 21, 1949, a terrific lightning bolt struck the belfry, shattering the Hook and Hastings pipe organ. A valiant effort by the Alton Fire Department saved the church from complete destruction. A fire resulted in over $75,000 in damage. Unfortunately, 2 of the 3 original bells were lost in the fire. The smallest bell in honor of St. Brigida, cast in 1871, was saved only by recasting. Two larger bells were obtained and now complete the ringing trio. They now sound the Angelus and the announcements for daily Mass, funerals, and weddings. It was at this time the installation of new space-age steeples appeared to top off the towers! On September 25, 1950, Mass was offered in thanksgiving for the reconstruction of the church.

In 1982, under the pastorate of Fr. Peter Donohoe, the church went through a dramatic change with the removal of the altars and statues, giving the Gothic church a modern sparse look. The church remained this way until 2022 when the interior of the church was once again transformed under the pastorate of Fr. Roger Schoenhofen, O.M.I. Colors were restored and lighting improved. The Stations of the Cross were redone, many accents were added, some statues reappeared, and the sanctuary was restored to some of its former glory.

In May of 1965, the former Bishop’s residence was razed, and a new rectory with offices was completed and occupied on May 15, 1966.

Our first school was constructed in 1860. On October 3, 1908, the cornerstone was laid for the construction of a new school north of the church. The building was completed in February 1909 and dedicated on May 26, 1909, at a cost of $32,938.25 The Ursuline Nuns staffed the school. The school offered classes from 1st to 12th grades! 9th – 12th-grade classes ended with the founding of Marquette Catholic High School in 1927 owned and operated by the Ursuline Nuns. Unfortunately, due to shrinking enrollment and financial instability, the grade school closed in May of 2019.

At the present time, we have begun a capital campaign to restore the structure of the church with much-needed repairs in stonework and tuckpointing. The project will cost $800,000. Preserving the Past for the Future Campaign will help us to continue to be a viable and integral place on Christian Hill as we proclaim the Gospel of Christ in our Catholic Tradition.

Bishops of the Alton Diocese